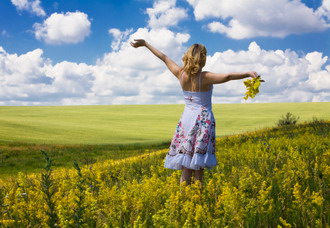 Notwithstanding any debate as to the effectiveness of positive thinking or the lack thereof, science has demonstrated that positive thinking has physical as well as psychological health benefits. This has been medically-ascertained by measuring what happens to the brain when natural pain-killing chemicals adjust the way neurons fire. Doctors in Italy and University of Michigan scientists have shown that patients who believe they are getting pain killers but who actually receive a placebo instead,, benefit both physically and mentally from the belief alone, which results in needed relief without drug interaction when the brain releases endorphins that block pain. Positive thinking as a human benefit, has now been medically verified.

Doctors also now believe that patients with higher levels of well being have lower risk from heart attacks, reduced stress hormone levels and less inflammation, which is an indication of how well the immune system is functioning. It is also becoming clear to scientists that chronic stress as well as psychological stress can slow down the healing of wounds, can weaken the immune system and lower the effectiveness of vaccines. These factors serve to demonstrate that when a patient can focus his attention on something beside his pain and his illness, it permits his body to profit from its own inherent healing abilities. These newly-demonstrated mind-body links clearly mean that positive thinking and feelings actually can affect a person’s health and well being.

For many decades, scientists, doctors and citizens alike scoffed at people who claimed that the power of the human mind could heal physical problems and illnesses. Now, those beliefs are not being subjected to quite as much ridicule as they were earlier. While science and medicine are still miles away from believing that the mind alone can cure fatal diseases or other major problems. However, they are ready to admit and demonstrate that positive attitudes have a direct affect on the human immune system which is the body’s first line of defense. To say it in even simpler terms, if you are happy with your life and have an optimistic approach to things, it will affect you in a good way. And that is the legacy of positive thinking.

A Columbia University neuroscientist recently said that people’s expectations can have profound effects on their brains and health. If this is true, it follows that having a good attitude and looking forward to things (positive thinking) has a positive health benefit. The converse, therefore might also be true and dreading things (negative thinking) can effect bodily and mental health in negative ways.

Read also:  Making The Most Of Now

All these things now being said, we can surely expect a steadily-increasing interest in the roles of medicine and positive thinking in our society.