Law of Attraction in Action: Episode 1

A short preview of the first episode of Law of Attraction in Action. 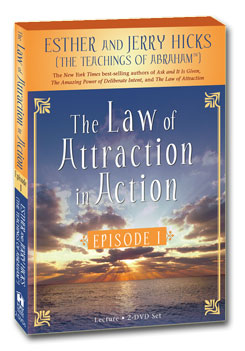 Attracting rage: Can an actor delve into all the angry, dark emotions without attracting unwanted things into his “real” life?

Mad at Dad: How do you stop attracting all that old father/son emotional baggage? “Let’s break this down,” says Abraham, “because it’s really hard not to give a rip about someone that you’ve wanted to love your whole life.”

Caged and muzzled: You’ve attracted your passion at work, but you’ve been stopped cold-and it’s making you sick!

Is it only words? Are mantras just meaningless words? Does saying “want” keep you from having? What about words used in prayer? How do the specific words we use affect what we attract?

Tough to love? Drinking, drugs, broken curfews… “A lot of my life revolves around a difficult 19-year-old daughter who’s had a difficult path.” A few pointers from Infinite Intelligence.

Tick Tock? The nature of time; aging; the universe expanding… linear time for timeless beings. Abraham helps us get a handle on “the perception of time” — slowing time down and “walking through tomorrow — today.”

The Book: How do the teachings of Abraham jive with traditional Christianity… or with any religion, for that matter? With an amusing “early days” tale of Jerry and Esther somehow finding themselves on a “Bible-belt” phone-in radio show!

Can The Law of Attraction be scientifically proven? A more detailed analysis of “The Law.” And how do emotion and matter interact to attract?

And much, much more… Answers and inspiration from the Non-Physical entity Abraham — whom Esther Hicks calls “infinite intelligence” and Jerry Hicks refers to as “the purest form of love I’ve ever encountered.”

Law of Attraction in Action: Episode I – Get It Now!