The Secret of the Void 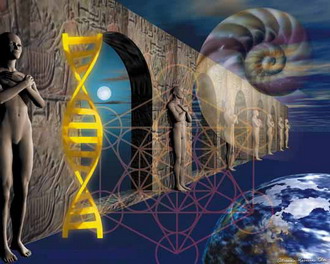 All Alone in Here

Several years ago I had a quiet but intense experience at the wedding of a close friend. I was early, and as I sat at my table I watched the other guests entering the room. One came in elated, dancing like a performer on stage. Another was withdrawn, inward, as if mulling over some sadness or pain. Some were eating, some talking, some laughing and some sitting quietly.

But what I saw with an almost painful intensity was that each one of us, no matter what we were doing or with whom we were doing it, was essentially in our own world. Not necessarily lonely, but alone, our thoughts, longings, our selves on some core level separate from everyone around us.

Every human being experiences this essential aloneness. Sometimes were not aware of it at all, and sometimes the awareness, like it was for my little cousin, is profound. But whatever the case, its always there.

Kabbalah explains that in truth there is nothing but G-d. Everything that exists, whether physical or spiritual, is simply a highly limited expression of its Creator, somewhat like each of your thoughts and actions is a little expression of you.

The infinite light of G-d, as its name implies, is overwhelming, filling every space. Left unmuted, this all-encompassing light would make it impossible for anything else to exist, just like a ray of light cannot exist as a separate entity within the body of the sun. So, in order to allow for Creation in all of its limitless details and forms, G-d had to conceal His own infinite light. This concealment, known as tzimtzum, is what enables us to be. And more, it allows us to experience ourselves as real, solid, and the center of our universe.

This Big Lie this core illusion of aloneness and solidity is what allows us to exist as separate and unique human beings. In its raw, unrectified state, it cuts us off from the truth. But ultimately we are destined to see through the walls, transcend the illusion, and fulfill our potential as uniquely magnificent expressions of the Divine.

The Sound of the Void

The illusion is powerful, but not total. If we were completely cut off from an awareness of what lies beyond, chances are we would be perfectly content. There would be no reason to question ourselves or our existence, no drive to continuously experience more.

But we are not cut off completely. A glimmer of the Infinite light from before Creation surrounds and permeates each person who walks this earth. This light is what gives us the profound sense that there is something else out there. Only the something doesnt always feel like an actual something. It often feels like something missing – a void.

Read also:  How To Trust The Universe And Shift The Impossible To The Possible

This void, this missing, hovers at the edge of our consciousness, threatening our comfortable sense of solidity and bringing with it an essential longing for. well, for something. Something more.

This sensation of something missing is actually the glimmer of something that is there, but too vast and amazing to be perceived by our ordinary senses. But as physical beings in a physical world, we are not naturally inclined to relate to it in this esoteric way. In fact, the non-physical all too often makes us feel vulnerable and uncomfortable. So, instead of slowly allowing our eyes to adjust to this more subtle light, we avoid the experience altogether, or seek to fill the void with physical things.

The subtle awareness of the void pulls us relentlessly toward the next high, the next success, the more exciting relationship, the bigger, flashier toy. The feelings it triggers – like sadness, depression, anxiety or dissatisfaction drive us to eat too much, drink too much, work too much, spend too much, need too much; in short, whatever it takes to avoid facing the threatening insubstantiality of it all.

But, as uncomfortable and threatening as it can feel, if you are willing to face the discomfort, to stop running and listen, you can begin to explore the secret of the void, to expand your ability to see and hear things that lie outside your normal range.

A Deeper Level of Life

In Hebrew, each letter of the alphabet has a gematria, a numerical equivalent. Whenever the letters of one word are numerically equivalent to the letters of a different word, it points to a secret relationship between the two.

It is fascinating to know that the Hebrew word for void, challal, is exactly numerically equivalent to the word chaim, which means life.

The message is simple. In being willing to embrace the vulnerability, to stop running away and instead stay present and expand your ability to see, you can begin to reconnect with what has been concealed from you, the part of you that is most truly and infinitely alive.

Eating in Bed Maintaining the Illusion of Being Solid

Most evenings, after Im finished with the tasks of the day, I reward myself by getting in bed and relaxing under the covers with a book. It feels secure and cozy, reassuringly solid and safe. And to further enhance the comforting feeling I almost always take a little bedtime snack with me. In fact, I sometimes take more than one.

Ive been doing this for many years, and, as is the case with most deeply ingrained habits, Ive become more than a little attached to it.

Recently I decided to give it up. I stopped eating in bed, and in doing so I discovered that my comforting habit had been covering up the sound of the void. The perceptions and sensations I began to experience were not necessarily comfortable. In fact, new, bigger things rarely are. But they were rewarding and profound.

Read also:  How Energetic Blocks Are Sabotaging Your Abundance

As physical beings, we are primed to seek permanence and stability. But the bad news the paradoxical news – is that physical things are inherently unstable and impermanent. Coming face to face with this fact can be scary. It can feel, indeed, like hovering over a dark and formless void. Its important to remember that this darkness is really a much vaster and more brilliant form of light one thats simply too great for our senses to contain.

Many of us spend our lives attempting to block it out, to run from the darkness, or to create stability and solidity by clinging to things that are intrinsically unstable. This, however, does nothing to change the darkness, nor to expand our capacity to see. We remain trapped in a world of struggle and illusion. But if, instead, we train our eyes, bit by bit, to see the concealed light, to hear the subtle music, we can begin to set ourselves free and to use this freedom to make a difference in our own lives and in the lives of those around us.

Do You Eat in Bed?

Whether you eat in bed or not, I am certain that there are things you do to block out the discomfort of the void. Maybe you eat or drink or work or sleep too much. Or maybe you take solace in having very strong opinions, in making yourself feel bigger and more solid by being right, criticizing, blaming or complaining. Maybe you try to lose yourself in a relationship, or maybe you avoid the vulnerability that an intimate relationship brings.

Whatever it is that you do – every now and then, just dont. Instead, let yourself be open to something anything – that challenges the way youve seen things till now. Going without that extra cookie, that glass of wine, or the need to prove your point might bring up feelings or perceptions that have something important to tell you. Giving up a protective habit is one of the most powerful ways to expand your capacity to see and hear what the habit is covering up. So listen and learn or better yet, do something that reflects a new, higher way of being.

Maybe you can let yourself be vulnerable to someone else where youd normally be defensive, to really listen rather than defend. Or maybe you can take an hour away from work to sit with your children and smile into their eyes, without having to accomplish anything at all. Learn some Torah, give some charity, or take a few minutes to open your heart to your Creator. These things bring more Divine light into the darkness and expand your ability to experience that light in your everyday life.